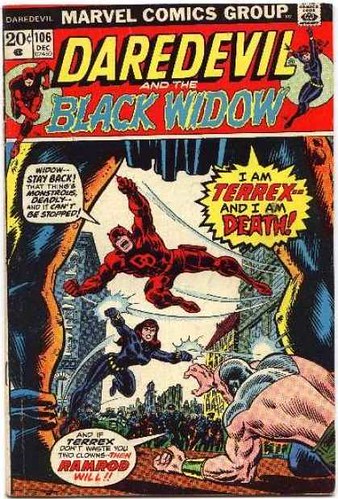 Okay. I'll give credit where credit is due.

Last recap, I stated that this storyline by Steve Gerber was a little too weird for my taste. I still stand by that. Last issue was certainly very odd. It also required too much non-Daredevil back story and exposition. This issue I am changing my tune a bit: Gerber turned last month's weird episode of Babylon 5 into a very moving and emotional saga about the line between heroics and villainy.

I am utterly compelled by this character of Moon Dragon. I had never heard of her before reading last issue and felt pretty strongly that her obvious science-fiction genesis didn't belong here. However, after reading where Mr. Gerber takes this saga, I will admit that I was wrong. In fact, I find the character fascinating. 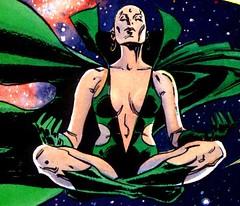 Check out her Wikipedia page. Affiliated over time with both The Avengers and The Defenders, Moon Dragon has a rich history that extends throughout the Marvel Universe. 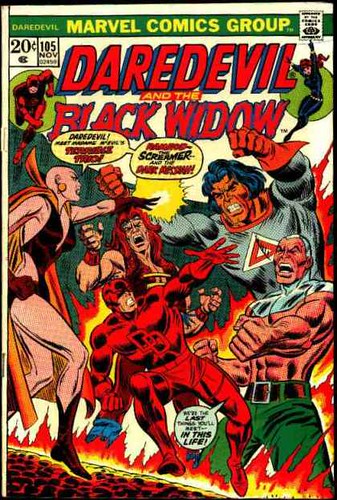 A brief note on the tagging for this entry. This puppy was one mean sumbitch to get tagged right.

Two guest appearance tags: Iron Man. Sub-Mariner. O page 15, the two are depicted engaged in a battle during an extended flashback sequence. The events depicted in this panel happened in Iron Man and have no bearing on Daredevil continuity. I include these guest appearances merely because I am a completist.

Eight villain tags: Depicted on the cover are Angar (1), Ramrod (2), Dark Messiah (3), and a new villain named (ridiculously) Madame McEvil (4). She refers to the aforementioned triumvirate of evil as The Terrible Trio (5). We learn inside the issue that Madame McEvil is actually named Moondragon (6). We open the issue where we left off with Kraven (7) about to hurl Daredevil off a cliff. We also introduce Terrex (8) in the final panel. Five villains, eight tags.

In this issue, we also learn that Kerwin J. Broderick is a villain of epic proportions, but I have not put his name in the tags. This would require going back and retagging the last several issues. I did add a "lame villain" tag in his honor, though. His being a villain is a Gerry Conway-esque letdown that was, quite frankly, when all is said and done, telegraphed a couple of issues ago. 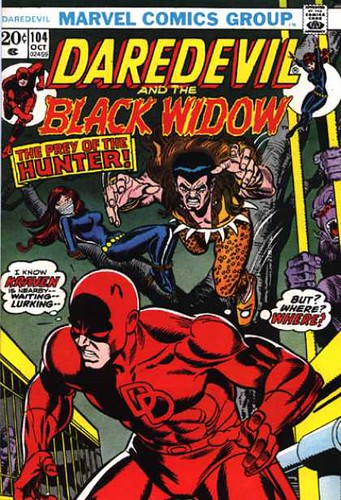 It's interesting that the issue immediately following a guest appearance by Spider-Man contains a villain most famous for his interactions with Spider-Man. This month's villain: Kraven, The Hunter!

I kinda adore Kraven. He's one of my favorite Spider-Man villains. His abilities, though-- namely, his superhuman strength, speed, stamina, agility, and reflexes-- make him a perfect foil for a hero as athletic as Daredevil. In addition to those powers, though, he has other abilities similar to Daredevil's, almost to the point of rivaling. Kraven regularly ingests a potion made from unnamed jungle herbs that grant him and enhancement to his sight, hearing, and smell. From Wikipedia: "He can see further and with much greater clarity than a normal human. His hearing is similarly enhanced, enabling him to detect sounds an ordinary human can't and sounds that a normal human could detect, but at much greater distances. Kraven can use his sense of smell to track a target by scent, much as some animals do, even if the scent has been somewhat eroded by natural factors." 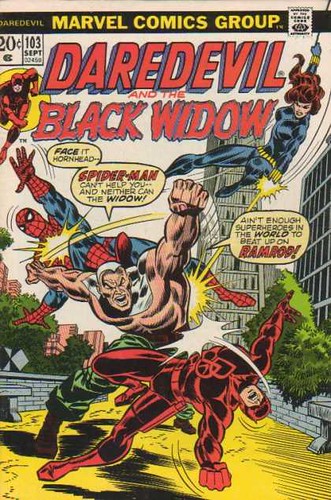 Upon my first reading of this issue, I reflected for a moment about how much this villain reminds me of one of my favorite Daredevil villains from the late 1980's. The villain in question: Bullet.

Depicted here on the cover of Daredevil 267 is Bullet: 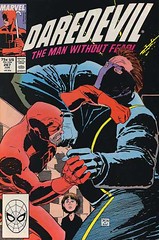 He's the guy Daredevil is punching in the face.

The villain of issue 103 is Ramrod, depicted here:

Inside issue 103, Daredevil punches him in the face.

The similarities do not end there, however. Quoting from Bullet's Wikipedia page: "Bullet appears to have near superhuman strength, speed, stamina, and durability." From Ramrod's: "He has superhuman strength, stamina, and durability." Basically, they are the same character. Again, according to Wikipedia, the only real difference is that Ramrod possesses a steel skeleton. That information is sort of a spoiler, though. We'll get to that later. 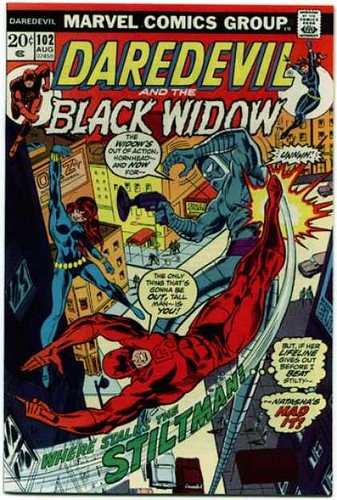 This was an unexpected surprise.

I had a small hiatus here in updating because I do not own a copy of Daredevil 102. I can't really do a review or recap of an issue that I do not have access to, so I had to go online and buy the issue in question. The hiatus took place while I waited for the issue to arrive in the mail. To be honest, it was a used copy of Essential Daredevil, volume 5 that I has purchased and was waiting for but it contains the issue in question as well as a couple of others that I will be getting to soon but do not actually own.

Anyway, I was shocked-- nay, horrified-- to see Stilt-Man on the cover of issue 102. Come on, Steve Gerber! You can do better than this! But wait...the issue isn't written by Steve Gerber.

It's written by Chris Claremont. I happen to be a pretty big fan of Chris Claremont, and until just a couple of hours ago, had no idea that he had ever written an issue of Daredevil. As it turns out, over the thirty-four years that volume one will be in print, Chris Claremont will pen three issues. This one is the first.

How does such a top-tier writer get stuck with a bottom-tier villain? Well, in 1973, Mr. Claremont was hardly top-tier. In fact, according to his Wikipedia page, in 1973, Claremont wasn't even listed on Marvel rosters as a writer. He was still a gofer in 1973. Apparently, his first real writing gig was the fledgling title Iron Fist in 1974. This work on Daredevil was just a fill-in for Steve Gerber, who might have been busy creating Howard The Duck this month.

Either way, Claremont's work speaks for itself. Most famous for his work on The Uncanny X-Men, he is well-known for "The Dark Phoenix Saga" and "The Days of Future Past." Also, he created a character whose very appearance in my blog will make my wife squeal with girlish delight. 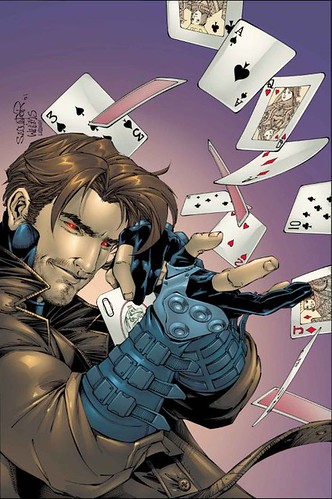 My wife loves her some Gambit. 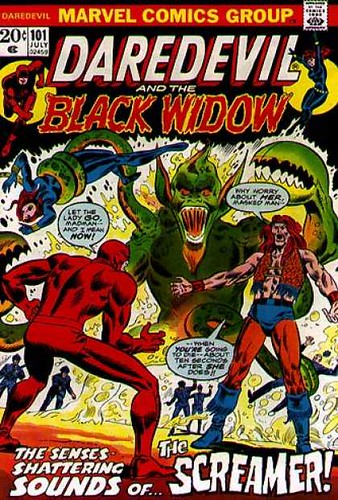 Five issues in and I'm pretty well sold on Steve Gerber. Yes, his stories are weird. No, his stories don't seem like they belong in the Daredevil universe. But he is a pretty good writer. He knows how to tell a compelling story and he knows how to fill in little details that make his oddities work in a world they don't belong. If Gerry Conway were to have written the saga of Angar, The Screamer, it would have been a blithering mess. 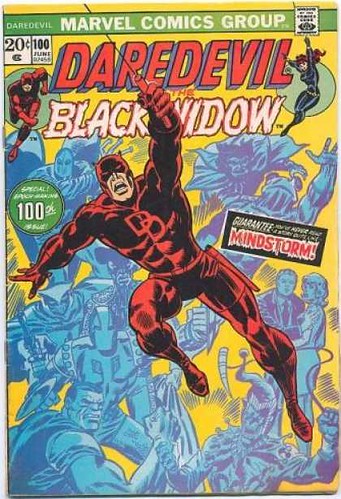 Remember how I said back in the recap of issue 97 that Steve Gerber was well-known for weird tales that don't really seem like they would work too well in the Daredevil universe? Well, this issue is a damn fine example of what I'm talking about. After writing two issues that Gerry Conway plotted and then a seemingly pointless Avengers tie-in, Gerber really sets the Weird Knob to 20 with his first foray into solo creation. Gerber is a good enough writer to pull it off, though. It's not just a trippy hallucinogenic tale being weaved here but a poignant social commentary about heroes and why they are necessary.

It's also issue 100. And we've just had a guest appearance in The Avengers. At least part of the time here must be spent getting readers that might just be hopping on board up to speed. Gerber takes an interesting approach to that job, too. 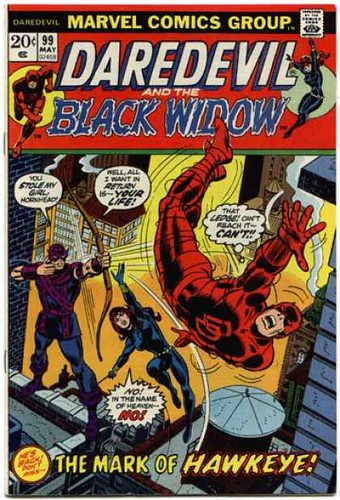 Why go into a lengthy discourse about how pointless this issue seems to be when Daredevil can sum it up nicely himself? From page 11, panel 3: 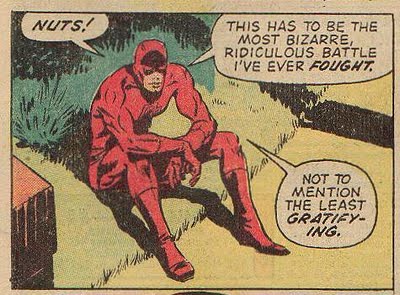 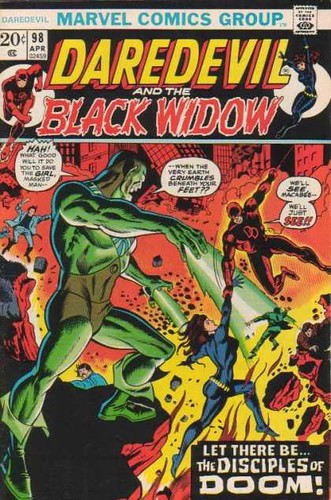 Last issue (also plotted by Conway and written by Gerber) ended with this startling panel: 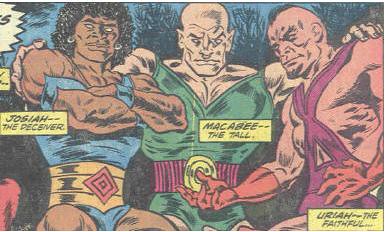 Depicted above are the vengeful lackeys of The Dark Messiah. Their powers are very unique and exceptional. From left, we have Josiah, Macabee, and Uriah. Josiah is capable of creating sonic vibration with his hands. Macabee can bend the earth and elements to his every whim. Uriah can control and alter reality. Each villain on his own would be a formidable opponent for our hero, but together they are The Disciples of Doom!

Who each person was before they received their powers from Mordecai Jones is never stated. It doesn't really matter much, I guess. What matters is that Steve Gerber has gotten his run started with a mighty roar, creating not just one kick ass villain, but four.

Some would say this storyline is a odd territory for a comic book such as Daredevil. They would be right. It is a risky gamble for a new writer, but I think Gerber pulls it off with considerable skill. This is not the last time theological themes will come up in this comic. All of the writers who approach these issues owe Steve Gerber a debt for paving the way. 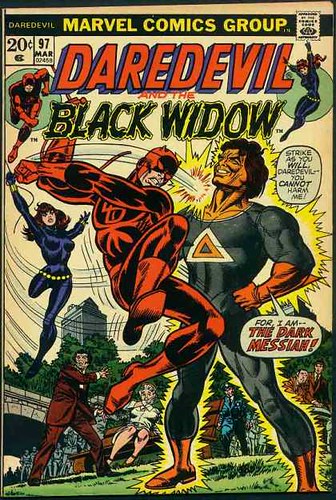 The credits for this (and the next issue) pave the way for a new writer to take over for Gerry Conway. Steve Gerber gets the official writing credit, but Gerry Conway gets a nod for plotting. This probably means that Gerber wrote a script from Conway's idea. The script presented, though, isn't too far a stretch from the odd tales usually penned by Steve Gerber.

Steve Gerber is probably best known for the creation of Howard The Duck. He's known for odd, little tales that mix adventure with social satire and absurdist humor. He is a good writer, though, and his work is highly regarded. I have not read his run on Daredevil, so I guess we'll see how good he is as we go.